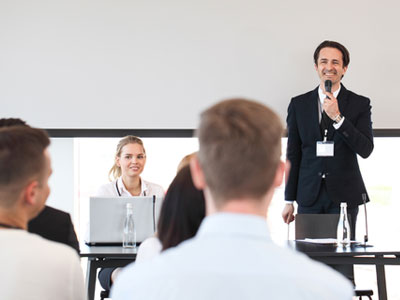 While you may not think that nervousness is beneficial in public speaking or for that matter in any other type of live performance, be it in the performing arts or in professional sports, the truth is that there are wonderful bonuses of the dreaded adrenaline rush. Many people, however, are unable to appreciate just what nervousness can do for them, because they have no control over it.

In truth, I would rather an individual be nervous in public speaking than not because nervousness actually increases your chances of success at the lectern. The problem for many people is that their nervousness in is control of them instead of the other way around. That, in itself, is a reason to fear public speaking. And, in cases like this, your level of stress continues to increase thereby increasing your nervousness instead of decreasing it.

Being able to control your anxiety, nervousness, jitters or whatever you call it means that you will discover:

Nervousness is debilitating only if you allow it to be. So, how do you take control of your nervousness and allow it to work for you? By learning how to breathe with the support of your diaphragm. If you have never thought of breathing in this manner, you might want to learn this technique. In doing so, you will also discover an overall reduction in the stress you encounter on a daily basis.

If you would like to know if you are breathing properly, stand in front of a mirror – minus your shirt or blouse – and take a deep breath. Did your shoulder rise? Did you suck in your mid-torso region? If so, then you are breathing incorrectly: you are a lazy or shallow breather. By breathing in this manner, the nervousness you feel at the lectern will only be exacerbated.

Make diaphragmatic breathing a habit and watch what happens the next time you have to give a presentation or speech. There is nothing better for controlling nervousness than breathing with this support. Imagine controlling your nervousness, putting an end to breathlessness and actually having control over your delivery just by taking a proper breath. Pretty novel idea, isn’t it?

The Voice Lady Nancy Daniels offers private, group and corporate training in voice and presentation skills as well as Voicing It!, the only complete video training program on voice improvement. Visit Nancy’s Voice Training Website and watch as she describes the best means of controlling nervousness in any form of public speaking.