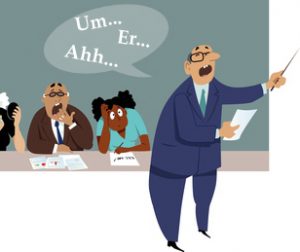 One of the most annoying traits in speaking is the use of verbal tics. We have all heard them at one time or another. If you are aware that your speech is plagued with these filler words, it would be a good idea to work on eliminating them because they take away from your message: your audience loses focus on what you are saying. Instead, they begin counting!

Words like um and ah are the most obvious. They are common; they are annoying; and, they mar your speech. Other two frequently heard words or phrases are like and you know.

Generally, the ums and ahs are filler words heard primarily during a presentation, a live interview, or in lengthy conversation. Like and you know, on the other hand, are words said out of habit. Some people resort to the phrase you know at the end of a sentence. Others use it at the beginning of the sentence; and, there are those who use it at both the beginning and the end of a sentence.

Like is more often heard by the generation Y population and is reminiscent of a ‘Valley Girl.’ The problem with the word like is that it gives the wrong impression. Constant use of that word sounds young, immature, and uneducated – definitely not the image you want to project if you are intent on furthering your career. In fact, it is certainly not the best impression to make if you are hoping to enhance your personal life as well.

Most people are unaware of these verbal tics until they hear themselves on a recording. In one instance, a young man with whom I was working was so annoyed at himself when he heard the amount of ums and ahs in his personal introduction (he could not say both his first and last name without an um!) that he vowed it would stop before his next class.

By our next session, his verbal tics were gone. How did he accomplish this feat?

1. By concentrating on listening to himself when he spoke.
2. By allowing himself to pause, take a breath, and then continue.
3. By practicing out loud.

You can put an end to these habits if you are motivated. Recording yourself and studying the playback is your 1st step. Your 2nd step is to allow yourself to pause instead of filling that space with sound. The 3rd step is to pay more attention to yourself when you are speaking. In doing so, it will make your delivery much more interesting and rewarding for both you and your audience, you know?

If you are interested in working with me privately by means of Zoom or Skype, click here for more information