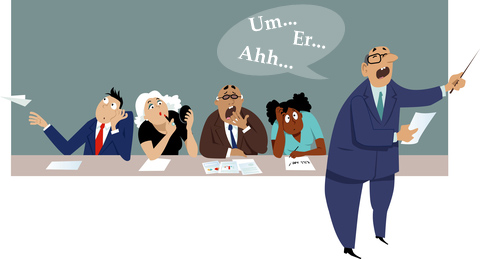 Have you ever listened to a speaker who used so many ahs or ums that you started counting them? When that happens, you lose the ability to concentrate on what the speaker is saying. Suffice it to say that the ums or ahs become the message.

Um, ah, uh, er, like, and you know are verbal tics usually uttered by inexperienced speakers although I have certainly had occasion to hear them from well-known presenters as well. Verbal tics can be heard at the end of a sentence or a paragraph but they can also be heard in the midst of sentences.

An occasional um or ah is not the problem. The problem occurs when we hear these interruptions in a constant or repeated pattern much like sing-song. This is also where the counting begins.  If you are um-ing or ah-ing every 4-5 words, you really need to work on your communication skills.

I once had a client, a young college student, who was taking my course along with several other telesales colleagues I would video the participants on the phone in real conversation with perspective clients and then play it back. When this young man heard the number of uhs he used, (he couldn’t even say the name of the company for which he worked without an uh!), he got up, left the room, and did not return to class that evening.

A basketball player with amazing drive and determination, this fellow came back the next week and surprised us all when he was able to speak on the phone with nary an um or ah! What an incredible change we witnessed.

In public speaking, silence is known as the pause and it is a very effective means of keeping your audience’s attention. It is short, sweet and to the point, but it is there.

It allows you to breathe as well as your listeners: to be bombarded with constant verbiage is tiring for your audience. While the pause can nicely fill the gap for the um or the ah, it does not mean pausing after every 4-5 words. That type of rhythmic delivery will put your audience to sleep.

If you have a problem with a verbal tic, record yourself delivering your presentation. Play it back and listen for the tics. (Be aware of the word like and the phrase you know because they are just as irritating.)

Practice your presentation again, concentrating on your words and the tics. This will take some effort because you will have to train yourself to be more cognizant of the occurrences. When you feel the need to ah, for example, pause momentarily and then continue.

With a little determination and practice, you can rid yourself of these annoying tics. The notion that ‘silence is golden’ is truer in public speaking than you may have thought.

If you are interested in working with me privately by means of Skype, call or email me.