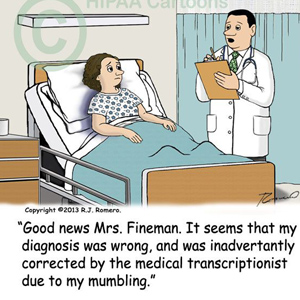 Do others often ask you to repeat yourself because they don’t understand you?  If you are a man, it is possible that you mumble.  Mumbling is easy to recognize:  sound is definitely coming out of the mouth however the lips are not moving.   If you are a woman, on the other hand, then it is more likely that you have a tight jaw, in which the lips are moving but the jaw is not.

In both of these cases, one’s diction is difficult to understand because the words are not being articulated clearly.  We have 5 articulators, also known as organs of speech, which form, separate, and unite our speech sounds.  They include the teeth, lips, tongue, jaw and velum or soft palate.  If any one of these organs is not being used in speaking, then one’s words will not be as easily recognized.

Also known as lazy lips, mumbling is more common among men.  While I have not researched this topic in a formal situation, what I have found, from my experience, is that mumbling not only afflicts men, but usually tall men.  It is much less common to find a short man who mumbles.  In fact, I usually find that short men speak distinctly and clearly.  [Please understand that I am generalizing.  Not all tall men mumble and I am confident that there are some short men who do!]

My theory on mumbling is that because taller boys in class may be the first to be ‘singled out’ by the teacher, it is possible that mumbling results because of insecurity or lack of preparation by that student.  They may be ‘picked on’ more often because of their height.

On the other hand, it is much less common to hear mumbling in women.  What often afflicts the female sex is lockjaw in which the lips move but the jaw is going nowhere.  I am amazed at the number of women with whom I work who complain of sore neck, shoulders, and/or jaw regions.   If tension is building in the jaw throughout the day, then one’s diction is going to be affected.

Both of these afflictions may also be brought on by imitating one’s parents.  If the father mumbles, there is a good chance his son will mumble.  If mom speaks with a tight jaw, then it is quite possible that her daughter will copy her mother’s bad habits.

I once worked with both a father and son who mumbled.  The son, a 12-year-old boy, spoke so fast and enunciated so indistinctly that it was almost impossible to understand anything he was saying.  While the boy resisted the change at first, when he saw and heard himself on video, he was stunned and agreed to work with me.  The change in both the father and son was astounding.  In fact, the boy’s ‘before’ and ‘after’ was so impressive that I showed his video clip during my presentations for several years.

Both mumbling and lockjaw can be eliminated if you are willing to make the change.

If you would like to see a wonderful improvement in volume control and diction, watch Mohammad’s ‘before & after’  video clip at Nancy’s Voice Training Website