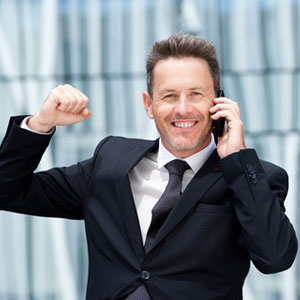 Have you ever considered what your vocal tone says over the phone? The man in the picture above is obviously happy – you can see it in his facial expression and in the ‘winning’ position of his arm.

There are many people, however, whose tone is saying one thing while their words are saying something else. Tone is the expression of a mood or an emotion and is generally determined by your topic or your subject.

I’ve worked with a lot of people who sounded cold or distant on the phone. Upon meeting them, I discovered that they were warm and friendly. Their tone of voice over the phone, however, gave an entirely different impression. Why does this happen? It could be that they are they don’t like talking on the phone. It is even possible that their posture affects their attitude which in turn affects their tone.

In the days before wireless phones and email, I worked with a veterinary pharmaceutical sales rep who sounded bored on the phone – certainly a questionable career choice for one in sales! After a few sessions with this man, I asked him where his phone was in his office. He told me it was on the credenza behind his desk.  He then added that his feet were on his desk. I suggested he move his phone to the desk and sit up straight the next time he used the phone. What a difference! He no longer sounded bored: he sounded professional.

There are those who are soft-spoken and may give the impression of lacking confidence. Or perhaps it is a businesswoman, over 21, who sounds like a pre-teen. Others may be loud and come across as being overbearing when in fact, they are not aggressive, just loud.

If you are unsure what your tone is saying, record yourself preferably with video. Say the words, Good Morning, to suggest the following expressions:

Play it back and listen to your tone. Was it different for each one? Did you face show emotion with those 5 different expressions?

You not only have a better voice inside of you but you also have many ways to improve the tone of your voice. Don’t let your vocal tone say one thing while your words say another.

The Voice Lady Nancy Daniels offers private, corporate and group workshops in voice and presentation skills as well as Voicing It!, the only video training program on voice improvement. Visit my Voice Training Services page and discover the best means of adding some life to your delivery whether it is over the phone, at the lectern, in a webinar, or in person.